In recent days we had talked about the Mediatek roadmap for the 2013 and 2014. Mediatek officially announced today the release of the new 8-core MT6592 chipset.

Unlike the new Samsung 8-core chipset, Mediatek's MT6592 will be the first 8-core in which all 8 cores will work simultaneously!

According to an explanatory pdf (download here in Chinese), published today by Mediatek, the benefits of the simultaneous operation of all 8 cores are mainly detectable in higher energy efficiency, higher performance and up to 20% more in the 1080p video frame rate. 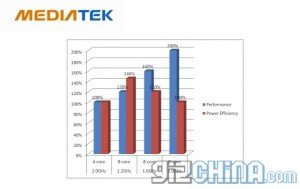 However, we are not yet in possession of the official specifications! What we know is that the chipset will support 1080p visualization, HEVC and VP9 decoding, 13 megapixel cameras and will be able to run Android 5.0.